HOLIDAYS IN MERAN AND ENVIRONS

Things to do and see in South Tyrol

Schenna is just 5 km away from the renowned SPA center of Meran, which can be aeasily reached with the public means. Meran is a vibrant spa town, characterized by spacious parks, easy walking routes, botanical gardens and waterways which invite visitors to linger and enjoy the green and pleasant atmosphere of the old town. Visitors will also find many shops and restaurants in the medieval arcades and alongside the elegant art nouveau buildings. The natural spectacle presented by the snow-covered peaks of the glaciers form a backdrop to the palm trees and exotic plants of the beautiful gardens in the old town or in Gardens of Trauttmansdorff Castle. In the environs you find many castle and museums that can be visited for free thanks to the MeranCard. 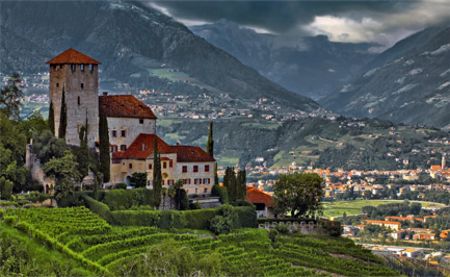 In the heart of the spa town of Merano/Meran, Terme Merano is a natural oasis, centrally located and a successful example of modern architecture within the Alpine landscape. A transparent cube of glass and steel with warmly accented wooden elements arches above twelve indoor pools. In the 50,000 sq. meter park which is part of the thermal baths, thirteen open-air swimming pools have been added. The overall effect offers pure relaxation in the midst of nature. Merano’s Thermal Baths offer visitors maximum relaxation in an incomparable environment that unites the enchantment of Alpine peaks with the city’s Mediterranean appeal. There are 15 indoor and outdoor pools available to visitors year round while the sauna facility offers eight saunas and steam rooms.

Mild climate and southern flora. The blooming gardens of Trauttmansdorff Castle are situated on a sunny slope above Merano, where Austrian Empress Sissy once sauntered. You will find the main attractions of the gardens distributed on 12 hectares of grounds: Sun, water & terraced gardens, forested gardens and South Tyrolean landscapes.

Should there nevertheless be a rainy day, it is a real must to visit the South Tyrol Museum of Archaeology. Not far from Walther Square and the medieval arcades, it is ideally situated in the centre of Bolzano. Experience 5,000 years of human history and visit the world-famous glacier mummy.

The Messner Mountain Museum Firmiano housed in Firmiano Castle was opened in 2006 after three years of renovation. Reinhold Messner also calls it the „enchanted mountain“, as mountains have the power to enchant people. At the Messner Mountain Museum Firmiano, you will exactly experience this philosophy. A modern structure of glass and steel was added to the old walls of Firmiano Castle and it now tells you about the importance of mountains for people. Learn about the history of mountaineering and experience the influence of mountains on art of several cultures.

The South Tyrolean provincial museum of history and culture, once the residence of the Counts of Tyrol, provides an overall view of settlers in the Alpine region from the 7th century BC until today. You can marvel at a melting furnace from the Bronze Age, which is still fully intact. The main wall, built around 1100, remains one of the oldest and best preserved castle walls and it still includes parts of the battlements. The two marble portals dating to the 12th century are rich in symbolic sculptures and are among the most original creations of Romanesque art in Tyrol. The chapel with frescoes from the 13th centuries offers the oldest examples of glass painting in Tyrol and a mighty wooden sculpture dating to the 14th century, representing the crucifixion scene. Tyrol Castle is said to be the cradle of Tyrol.